Take pause for a moment and consider the vast sea of ideas active in our world right this second…  Can you picture it?  At any given

time, billions of people collectively generate billions of ideas.  Unfortunately, most ideas never leave a person’s head or are only ever shared with a family member, or perhaps one or two close friends.  Ideas die prematurely every day because they are not able to take root in “fertile ground”.  Ideas need to mix with other ideas and they need to encounter support and experience conflict to survive and grow.

In our increasingly digital world, ideas have never had it so good!  When a person chooses to enter in and engage with others in online spaces, it’s like a veil is lifted for them and they see what was hidden from them previously, a connected sea of ideas.  You can see the mixing of ideas take place through Twitter, Blogs, Wikis, Youtube, TED, Google +, Facebook, and hundreds of other interesting spaces.

I’ve just started to read “Where Good Ideas Come From: The Natural History of Innovation” by Steven Johnson (see TED talk).  He describes how Kleiber’s law involving a pattern of negative quarter-power scaling in 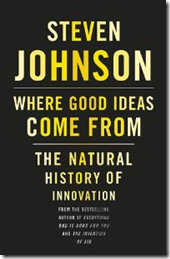 biological systems such as metabolism, relates to innovation.  In simple terms, “size matters”.  Larger organisms and animals live longer than smaller ones.  Theoretical physicist Geoffrey West applied Kleiber’s law to cities and through research learned that “Kleiber’s negative quarter-power scaling governed the energy and transportation growth of city living” (Kindle 137).  They also discovered that “Every datapoint that involved creativity and innovation—patents, R&D budgets, ‘supercreative’ professions, inventors—also followed a quarter-power law, in a way that was every bit as predictable as Kleiber’s law” (Kindle 142). However, they found that this law “governing innovation was positive, not negative.  A city that was ten times larger than its neighbor wasn’t ten times more innovative; it was seventeen times more innovative. A metropolis fifty times bigger than a town was 130 times more innovative” (Kindle 144).  Here’s the clincher (Kindle 147):

“as cities get bigger, they generate ideas at a faster clip”

Size, actually potential connections between people, serves as an amplifier for idea generation, mixing, and innovation.  The real question is, does this map to digital spaces?  Because if it does, the limitations and environmental considerations inherent in a geographic location like a city, would be non-existent. In fact, digital spaces and technology amps up the speed of innovation even further.

“It is one of the great truisms of our time that we live in an age of technological acceleration; the new paradigms keep rolling in, and the intervals between them keep shortening” (Kindle 169)

Steven Johnson writes about “the 10/10 rule: a decade to build the new platform, and a decade for it to find a mass audience” (Kindle 177).  He refers to the time that elapses between an original idea and mass adoption using examples like color TV, HDTV, AM radio, VCRs, DVDs, Cell phones, PCs, and GPS devices.  It took roughly 10 years for each idea to begin to take root and another 10 to reach mass adoption.  He shares this example of how the web (digital spaces) is a major game changer for innovation:

“YouTube went from idea to mass adoption in less than two years. Something about the Web environment had enabled Hurley, Chen, and Karim to unleash a good idea on the world with astonishing speed. They took the 10/10 rule and made it 1/1” (Kindle 215)

Chris Anderson of Wired and TED.com fame confirmed this phenomenon in his TED talk “How web video powers global innovation”.  Things are very different now for innovation and idea mixing in our massively connected digital spaces.  Clearly “we are often better served by connecting ideas than we are by protecting them” (Kindle 278).

So, given the fact (I’ll boldly state it this way) that digital spaces significantly amplify idea generation, mixing, and innovation, what should the K12 education system’s priorities look like?  It seems that we often dance around the importance of technology for teachers and students.  Some people argue that technology is “just a tool” in education, much like any other tool, equal, similar, not better.  Some such as the Association of Waldorf Schools (A Silicon Valley School That Doesn’t Compute) advocate for technology free learning environments.  There seems to be fairly compelling evidence that technology and digital spaces are key to maximizing ideas and innovation.  Why then, such debate about the value of technology and digital spaces in schools?

My own view is that we need to start to break down the barriers to technology and digital space adoption in schools.  If the evidence is believable then technology and digital spaces should be core, essential, and pervasive to learning and teaching, not optional and secondary.  I do acknowledge the issues of cost and equity.  But isn’t it a matter of priority?  Billions of dollars are invested in education every year.  How much of this is invested wisely, in the things, people, and processes that will make the greatest difference for kids?  In case 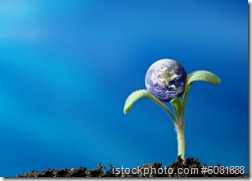 you’re wondering, I’m not advocating for technology vs teachers, both are essential.  But teachers, or rather teaching and learning, without technology and digital spaces would seem to be inappropriate given the evidence for ideas and innovation.  Given what we know, isn’t our education system doing a disservice to students and our own future by not fully embracing technology and digital spaces?  Isn’t it time to acknowledge that technology for learning is a moral imperative and prioritize and invest accordingly?  Our world has huge problems that no one seems to know how to solve, yet.  We need an acceleration of ideas and innovation more now than ever before because our future depends on it!