I’ve started reading another book.  Yah, I know, what a surprise :-)  In How to Create a Mind: The Secret of Human Thought Revealed, Ray Kurzweil claims “this is why we invent tools – to compensate for our shortcomings” (Kindle 458).  That is an interesting statement given the checkered past the advancement of society has.  Although our technology is agnostic, it always seems to have a good and an 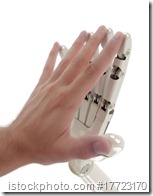 evil use or purpose.  In Race Against the Machine: How the Digital Revolution is Accelerating Innovation et al, the authors quote “’In the years ahead,’ Rifkin wrote, more sophisticated software technologies are going to bring civilization ever closer to a near-workerless world’” (Kindle 118) and claim that the “the role of humans as the most important factor of production is bound to diminish in the same way that the role of horses in agricultural production was first diminished and then eliminated by the introduction of tractors” (Kindle 125).  In light of this future, education systems need to wake up and reinvent themselves in an increasingly intelligent machine driven world as “other skills have become worthless, and people who hold the wrong ones now find that they have little to offer employers. They’re losing the race against the machine” (Kindle 158).  Can we continue to hang onto and value investing precious learning time in obsolete skills such as cursive writing?

I was in a secondary school earlier this week and some teachers spoke up with concerns that as students increasingly use technology they lose the ability to write “properly”.  Other teachers stated they would never trust online resources like Wikipedia.  This should concern us I think.  The world has changed but education systems continue to lag in thinking and learning / skill priorities.  As to writing “properly”, how is it that printing or cursive writing is “proper” while digital writing is not?  In the new world, it is all about the ability to think, research, create, plan, organize, present,

etc. which involves writing digitally, creating digital media, communicating digitally and face to face, etc.  In my work, I never cursive write – I don’t know how to.  I print when I have to, and I sign paperwork.  All other writing, note taking, creating, is done digitally.  Paper based writing gets stuck to the paper, isn’t easily shared, isn’t easily edited / changed or added to, isn’t easily moved into other media forms, etc.  In an age of exponential technological change, we aught to think different, as Steve Jobs would often say.  Those that “get” technology and can leverage it’s ever increasing abilities, will succeed in our rapidly changing world.  Those that don’t will unfortunately be left behind.  It is our reality.  Let’s not confuse the past with the future.

“It’s hard to believe you’d have an economy at all if you gave pink slips to more than half the labor force. But that—in slow motion—is what the industrial revolution did to the workforce of the early 19th century. Two hundred years ago, 70 percent of American workers lived on the farm. Today automation has eliminated all but 1 percent of their jobs, replacing them (and their work animals) with machines” (Jan 19, 2013 - http://www.wired.com/gadgetlab/2012/12/ff-robots-will-take-our-jobs/).

The article referenced above continues with “the rote tasks of any information-intensive job can be automated. It doesn’t matter if you are a doctor, lawyer, architect, reporter, or even programmer: The robot takeover will be epic. -- And it has already begun”.  This is not something society is speculating about, it’s not a debate topic for

students, it is happening.  Shouldn’t our education systems embrace the new reality and establish new priorities for learning so that students are prepared for their future, not our past?  Howard Gardner writes in Five Minds for the Future that “just as the book made a photographic memory a luxury, current computers render forced memorization even less important” (Kindle 585).  Memorizing facts and figures will not get a person far in the new world.  Knowing how to know, to learn, to solve, to share, these abilities matter.

Education does play a very pivotal role in the Robot Age since “what we want, what we need, what we must have are indispensable human beings. We need original thinkers, provocateurs, and people who care”, Linchpin (Kindle 159).  What a fabulous time to be alive and what a strategic opportunity those in the education system have to make a difference in our future.  The worry I have though is how glacially slow the pace of change can be in the education space.  We need to get better at rallying people to embrace essential changes faster.  Gardner claims that “those at the workplace are charged with selecting individuals who appear to possess the right kinds of knowledge, skills, minds—in my terms, they should be searching for individuals who possess disciplined, synthesizing, creating, 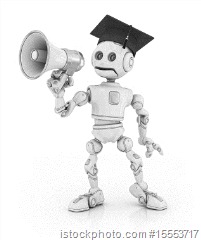 respectful, and ethical minds” (Kindle 186).  He continues with “in the future, individuals must learn how to synthesize knowledge and how to extend it in new and unfamiliar ways” (Kindle 685).

I’ve written previously about how machines will disrupt our world and displace most workers.  I do worry about that future which is why I am passionate about doing my part to reinvent how our systems work to prepare young people for the future.  The coming robot age (actually it’s already here in many ways) motivates me – I hope it motivates you – to embrace more of what makes us humans different from our machines.  As the Internet article linked above says, “robots create jobs that we did not even know we wanted done”.  Jobs will come and go so let’s work to leverage our robots to eliminate what we don’t want to do or be while we emphasize our human nature, that which machines will never replace!