Innovate to a Preferred Future

A lot of people are writing and speaking about innovation these days.  I hesitated to join in but it’s been on my mind lately too so why not see if I can add to the conversation.  Wikipedia (Feb. 25, 2012) starts its article on this topic with “Innovation is the creation of better or more effective products, processes, services, technologies, or ideas”.  When I read about the enormous problems 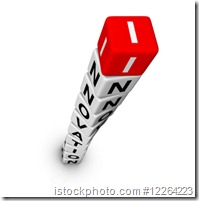 facing us today and into the future, I see a rising need for more innovative thinking.  The worlds problems seem overwhelming with automated work, fuel costs and scarcity, war, public and private debt loads, education systems in need of redesign, governments buried in red tape and complexity, and the list goes on.  Small thinking isn’t going to help us solve these problems but innovation can.  The environment for learning matters tremendously as the authors of A New Culture of Learning suggest “when play happens within a medium for learning—much like a culture in a petri dish—it creates a context in which information, ideas, and passions grow” (Kindle 62).  Imagination and possibility thinking is what is needed more than ever.  We need students and adults, to get out of the box.

Our school board has approved the creation of an exciting new school called the Inquiry Hub which is the brain child of District Principal Stephen Whiffin.  Students in this school will be immersed in “an innovative, technology driven, full-time program which allows them to pursue their own learning questions by shaping their educational experience around their interests instead of structured classes”.

The intentions are to unlock the potential of students to learn in innovative ways.  There is the possibility that what is learned through this school will find its way into our traditional schools to increase innovation throughout.  This is the sort of thinking we need more of.  We need to be coloring outside the lines of tradition more so that more people will be able to tackle the enormous problems faced today and in the future.

An interesting paradox is upon us.  Most traditional thinking is that more education leads to greater success and prosperity.  Well, how does that map to a future of a workerless economy?  I’ve read 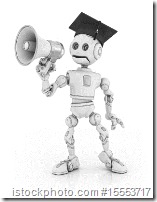 articles about the jobless recovery being experienced post 2008.  Previous recessions rebounded with people being hired back.  This most recent event has seen very low rehiring rates but much higher investment in machines and automation.  “In the years ahead,” Rifkin wrote, “more sophisticated software technologies are going to bring civilization ever closer to a near-workerless world” (Race Against the Machine, Kindle 118).  The authors do argue for an educational solution.  I believe that more education isn’t necessarily the answer but different learning could be.

“we are in the early throes of a Great Restructuring. Our technologies are racing ahead but many of our skills and organizations are lagging behind. So it’s urgent that we understand these phenomena, discuss their implications, and come up with strategies that allow human workers to race ahead with machines instead of racing against them” (Kindle 171)

We shouldn’t be like “[m]ost economists [who] aren't taking these worries very seriously. The idea that computers might significantly disrupt human labor markets—and, thus, further weaken the global economy—so far remains on the fringes” (Kindle 142).  Education and the world of work is where innovation really needs to play a key role in our future.  But, the question is, can our current education system as we know it with current curriculum and practices, meet the challenge?  I don’t think so.  Can it change and innovate fast enough?  I hope so.  Author Charles Leadbetter speaks about the 7 C’s of innovation.  Crisis, the first ‘C’, “generates focus, urgency, sharing, and new models”.  He includes Challenge which involves “asking stupid questions, supporting useful deviants, and supporting the future”.  We have many places in our world in a state of crisis, even our own province of British Columbia is faced with overwhelming debt, rapidly rising costs, political dysfunction, a dissatisfied population who relentlessly demands more services but simultaneously demands less taxes (seriously, how can that work?).  We have an education system which is actually pretty good (for today) but doesn’t evolve fast enough (it’s changes at a glacial pace) to provide for the much needed innovation.  In a world where “computers improve so quickly that their capabilities pass from the realm of science fiction into the everyday world not over the course of a human lifetime, or even within the span of a professional’s career, but instead in just a few years” (Race Against the Machine, Kindle 233).

I think we humans have been designed rather well to be adaptable, to generate new thinking and ideas, to overcome seemingly impossible obstacles.  I do think we have reason to have hope as we face the worlds problems.  Tools like “the city and the Web possess an undeniable track record at generating innovation” (Where Good Ideas Come From, Kindle 220).  “The trick to having good ideas is not to sit around in glorious isolation and try to think big thoughts. The trick is to get more parts on the table” (Kindle 515) or “a good idea is a network” (Kindle 522).  Connecting and networking minds, face to face (cities) and virtually matters to innovation.  Educational environments like our new Inquiry Hub are important “to make your 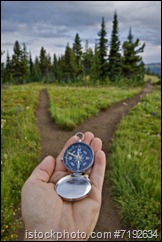 mind more innovative, you have to place it inside environments that share that same network signature: networks of ideas or people that mimic the neural networks of a mind exploring the boundaries of the adjacent possible” (Kindle 546).  Mixing ideas causes the impossible to become possible.  Education is a key answer then, but we need it to be less rigid and content driven, and more about inquiry, problem solving, projects, invention, creation, play, and passion.  We need to weave the core knowledge, skills, and behaviors our society values, into a fundamentally different model for learning.  There’s certainly a lot of talk in BC about this but what we need now is flexibility and action.  Now is the time to learn differently, be immersed in innovation, and successfully face the problems in front of us.