The Tale of an ISTE Learner

Along with about 20,000 others last week, I was learning at the pace of tweets.  ISTE puts on a pretty amazing conference each year where educators involved with educational technology gather en mass.  This year ISTE hailed from San Antonio, Texas home of the famous Alamo where the Texan’s and Mexicans had their standoff in 1836.  The temperature was a balmy 38 degrees Celsius with a “feels like” of 46.  Prior to heading down, I noticed via Twitter that a colleague I only knew through tweets and blogs was there so we arranged to meet Saturday evening for dinner.  After enjoying some 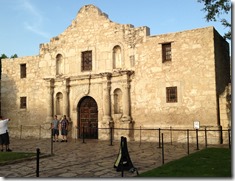 amazing Texan ribs, we wandered over to the Alamo – it was closed so could only see the outside. This was pretty exciting for me as I had read about the Alamo battle in a historical fiction novel recently.  It was cool to experience a piece of history in person I only knew through a book.  San Antonio has a river, well “creek” might better describe it, that meanders through the down town with restaurants spilling over into a pathway called the River Walk.  We wandered, 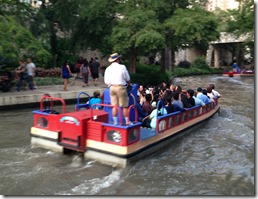 along the river walk with 1000’s of others on a path snaking in and around the city.  The river boats were a continuous feature loaded up with tourists.  Interestingly, some were dinner “cruises”.

On Sunday I spent 6 hours in a workshop on Augmented Reality (AR).  Simply, AR is a recorded layer that appears on a mobile device when a trigger occurs.  A trigger can be a recognized image or a GPS location.  We learned to create simple auras using a tool, Aurasma.  Auras are what the recorded augmented layers are called.  See MentalEdge for some simple guidelines to get you started.  Try this: (1) install the Aurasma app on your mobile device and (2) open this page on your computer or tablet of the US $20 bill, (3) open Aurasma on your smartphone and aim it at the image of the $20 bill.  You should see the aura come to life in front of your eyes.

On the lunch break, I was chatting with a woman who was with one of the sponsors.  She gave me a business card and asked about what I was learning today so I showed her.  I asked her if I could video her for 10 seconds talking about her business / products.  After recording her, I used Aurasma to create an aura for her business card.  Once created, anyone can use Aurasma to aim at her business card and the video clip will play in the bottom right-hand corner of her card.  In other words, it looks like the card comes to life with her telling the story.

There are so many great uses for AR, some that come to mind for me include:

One last example, check out the painting of Scottish poet Robert Burns (find the image and click it, point Aurasma at the image) morphing into a video advertisement of a person reciting a poem.

On the vendor floor, a massive experience by the way, I saw this little guy.  It’s a programmable robot (students could write the programs) with significant degrees of freedom of motion.  It can sit, stand up, listen for instruction, talk and clarify, play music and dance to it as with this video of him with a Michael Jackson tune.  Robots are getting “friendlier” and more easily programmed.  Where might this type of technology be in 5 years?

I learned a lot but am only sharing some snippets with you here.  I would be remiss if I didn’t share the closing keynote with you.  You can watch it hear.  Be sure to fast forward the video to the 22 minute 30 second mark to skip the lead up material and get right to the keynote.

If you’re interested in flipping through my notes, I tweeted them live and have put them here for future reference.  I highly recommend that if you are an educator or a person involved with vision, strategy, implementation, and support of technology in schools, ISTE is a must attend!