Every so often I just have to pause to contemplate the awesomeness of our world.  Technology has certainly brought the world amazing tools and services.  I’m reading an historical fiction book “The Seekers”, book #3 in an 8 book series.  The story is set in the 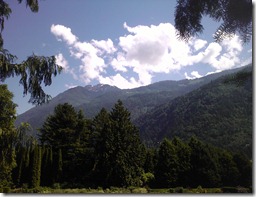 late 1700’s, early 1800’s in the newly formed USA.  At one point a young couple migrates west down the Ohio river, acquires 20 acres, builds a crude cabin, begins to clear land, plant corn, and own a cow.  The harsh lifestyle is astonishing.  I suspect that most of us in the developed world take for granted what we have and enjoy.  Those early settlers lived on corn mush and semi-sour milk, every day, every meal.  Their cooking, bathing, clothing, labouring, entertaining capacity was very poor.  To reach the small village near the fort to trade with others, they walked four miles through harsh terrain.  At least they had ‘central heating’ for their cabin, a fireplace!  Think about the impact of central heating and electricity on our lives.  On page 433 one character proclaims “the pace of invention and technical progress is astounding”.  It’s amazing how we’ve lived and experienced that statement over the past 200 years.

Invention and innovation are self fulfilling phenomenon.  One feeds the other.  This is our history.  Think about the “simple” wheel .  The wheel “has become one of the world's most famous, and most useful technologies” (ref). How many innovations and new inventions were spawned by it’s development?  This is the story of all invention.  One creation leads to another, which leads to another, and so on.  The so called ‘information age’ has been a breath-taking ride of amazing invention!  Riding the wave of innovation has given us smart phones, tablets, and the wireless Internet.  Think back 15 years… do you recall ever imagining being able to take a picture with your phone and within seconds have it appear in a blog post that will be accessible to billions world-wide (okay, my readership isn’t that broad).  I used my Windows 7 Phone to take a picture of my laptop screen chose to email it to myself.  Seconds later the email arrives on my laptop, I open it, save the attached picture to the laptop and drag it into this post.  Take a moment to consider the amazing complexity of what just occurred to make this happen…  you can’t comprehend it can you?  None of us can even begin to “really” explain the layers of technology involved and how they work. 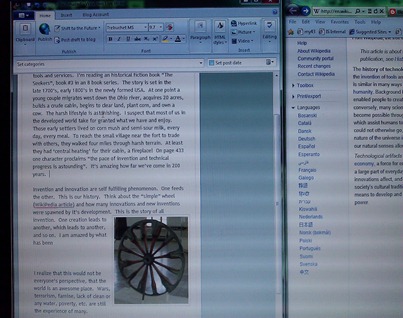 Oh wait, you probably never imagined blogs.  Isn’t it amazing that anyone can now become a writer on the world stage and at very little cost (some widely available tools).

If you have the benefit of owning an iPad or other tablet you should be amazed every day!  I’m listening to Christmas music, streaming

wirelessly of course, through my iPad using a free app, AccuRadio.  I can access something like 480 different music “channels” through this app.  Does anyone remember when radios were varying sized boxes of electronics with an antennae that allowed access to a few dozen nearby stations?  Okay, we still have this in our home stereos and cars, but it won’t be long before everything is simply an App that gets its life from an Internet connection.

As we enter 2012, we should be prepared to be even more amazed.  I’ve written many times that we are on the steep side of the exponential curve of change and innovation.  Predicting the next year let alone 10 years is becoming nearly impossible.  Amazing inventions are being produced faster than ever.  We should take time to ponder where we’ve come from as we ride this wave of change.  Here’s looking forward to a great 2012.  I wonder what new inventions we will get to experience…  Take time to Be Amazed!